This weekend I had the amazing opportunity to spend time with my mom. She was in the area for a conference, and decided to pop by 😉

On Saturday we made a trek out to Temple Newsam, a house under the care of the Leeds City Council. Along with the house, there was also a very large farm. It was all surrounded by the classic British landscape of rolling green fields with rows of trees and the occasional stone wall. All you needed was some roaming sheep and you had just about every British stereotype surrounding you (except for the rain, but that did come later). I don’t have many pictures, because my mom was the camera bearer for the weekend, but my snapchat story was a happening place for a while.

The house was impressive and very big. As usual with these kinds of places, you can’t see the entire house. I think we were able to see just under half of it (which was still a lot) spread over the four floors. There was a staggering number of paintings in this place; everything from the owner’s second cousin to neighbour’s dogs had a painting hanging on a wall somewhere. It was also interesting to note the Oriental influences in the designs of some of the rooms. At noon the volunteers gathered everyone in the house to the Grand Staircase to watch a clock chime. It was a scene that had carts, boats and people go across the scene. It also had 8 different chimes. In all of the rooms there would be a booklet describing the room and giving some of its history. Some of them had pictures showing the shape and size the rooms once used to be. And 99% of the time, the change was because the owner had this Grand Staircase installed, which then also needed an access hallway. This isolated some rooms, and divided others.

The house was nice to look through, but I enjoyed the farm more. Mainly because there had been a number of births recently (recently being within the past week). There were 3 litters of piglets, lambs, goats, cows and chicks. They were all very cute. One of the litters of pigs had 11 piglets! The piglets are so small compared to their mom, and they almost seem to be walking on their ‘tip-toes’. There were some very fuzzy hens, and the more I saw, the fuzzier they seemed to become. The farm also had a number of exhibits set up, detailing some of the history and current procedures (the farm is still very much a functional and working farm).

One of my favourite moments was when we walked by the cows. They’re all in this long row of barn, able to look out to where we were walking. One cow moos, and another responds. Then suddenly every cow is mooing. It was hilarious. They wouldn’t stop and it kept getting louder. I don’t know why I found it so funny. Then the farmer came by to feed them and suddenly it was a stampede to have a spot at the fence to access the food.

In the afternoon, we went to afternoon tea at the same place I had gone with Arthur and Lynn a while back. The spread wasn’t quite as intense as the first time, because it was a discounted afternoon tea for mothers day, but the quality was still everything I remembered. Very delicious, and I was glad to share it with my mom.

As some of you may or may not know, March 6th was “Mothering Sunday”, or Mother’s Day, here in Britain. How fitting that the weekend my mom is here to visit, it’s Mother’s Day 🙂 We spent the day in York, as my mom wanted to hear Evensong at York Minster. Despite the fact that I’d been to York already, there was almost no repetition in the things we did. We started off at the National Railway Museum, where beyond all chances, I ran in to two of my GBDA friends from Canada, who are currently studying abroad in Liverpool. I’m still shocked that we ran into each other; that we would be in not only the same city and same museum, but in the same gallery at the same time. Wild. The NRM was cool, they have an impressive number of trains. It was neat to see the progression of the passenger train car, as well as the extremes that would be taken in decorating the cars for the Royal Family. We got to see the Flying Scotsman, which is the most famous train in the world (or so they claim – I’d never heard of it before). It has had an impressive history (built in 1923) and when they way it’s a globetrotter, they mean it. This engine has been to Australia and the USA. It’s been used in the War, pulled passengers and cargo. And it’s about to go back to work after the exhibition is finished.

One of the most interesting train cars was the mail train car. Mail would be sorted while the train was moving. When they were approaching a town or city that they had mail for, the letters would be bound in an intense leather bag with multiple buckles. They would then hang the bag off the side of the train on a little crane and a net on the side of the tracks would catch the bag as the train few by at full speed. The car also had a net that could be extended off the side so that the same process vice versa could happen to collect the next round of mail.

After the NRM, we wandered our way to Shambles Market, where I was hoping to pick up one of the shawls I had seen on my last trip, but the stand wasn’t there unfortunately. Probably for the best, it would have been an expensive piece of clothing. We had lunch in a little second story cafe and headed to the Treasurer’s House, a National Trust building.

The Treasurer’s House, situated beside York Minster, once housed the person responsible for all of the Minster’s finances. Those days have long passed, but the last owner of the house, Frank Green, decided to bestow its former name to it once again. It would appear that the desire for grand rooms is a popular one, as Green had a Grand Hall added to the house. The hall completely divided the upper floor, and a new staircase had to be built in order to access the other half of the upper floor. If I’m being honest, the room wasn’t even that grand, except for its high ceilings. You could see where the floors had once been. The house had a number of ‘state beds’, beds that are rather over the top to represent status and to host Royalty, should they ever come to visit. And they did, though the beds that they stayed in were much plainer than the ones Green had brought in at a later date. These state beds reached the ceilings, had lots of drapes and fabric and grand headboards. Green had the crests of the royalty that stayed in the rooms previously added to the headboards.

We then walked along a section of the town wall, which for the most part are still completely intact. We were debating getting a little snack at a bakery, but when we walked by a gelato place, we were sold. I got pistachio, salted caramel and “Spiruli”, which had a milky/white chocolate flavour and was bright blue. It’s made completely of natural ingredients, and gets its blue colour from Spirulina algae. It was my favourite of the 3, which is saying a lot because I love pistachio. 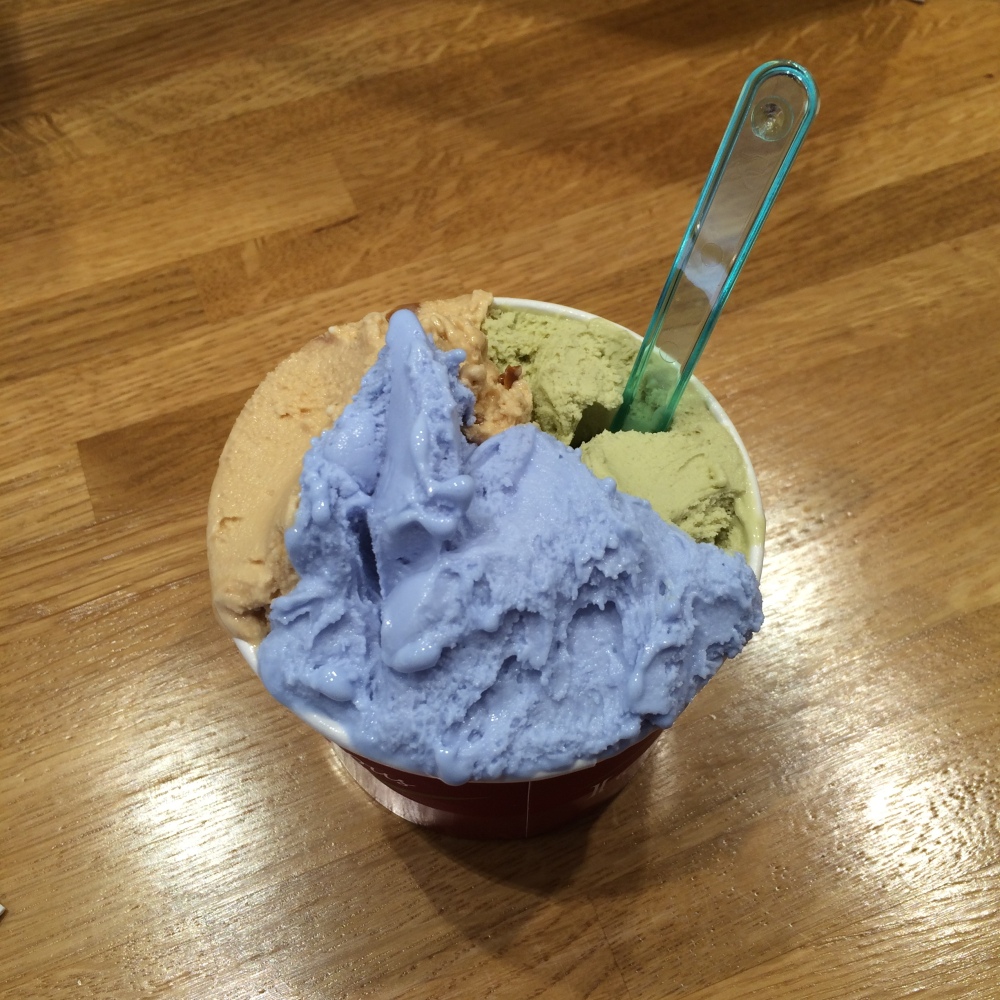 The last stop of our day was York Minster for their Evensong service. It was beautiful. I loved hearing the choir sing with the organ. I was surprised at how young some of the choir members were. One little girl had a little wooden box to stand on. I couldn’t understand what they were saying half the time, but it was wonderful to listen to nonetheless. We got to sit in the choir area in front of the nave screen, which is something tourists are not allowed to do on the tours. (For those of you not up to date on cathedral naming, the choir is the area with wooden bench seats that looks almost like Parliament. The nave screen is not an actual screen, but rather the divide between the choir and the rest of the congregation, or between one end of the nave and the other. These pictures are from when I went to York in January).

the choir and organ, which is sitting atop the nave screen

This morning we went to the Royal Armouries here in Leeds. It was a very impressive, if repetitive, collection of guns, swords, other weapons, and armour. I got to try shooting a real crossbow though, which is something I’ve never done before. I hit one ring out from a bullseye. They have what they call the “Hall of Steel”, which is this stair case that curls around a column with hundreds, if not thousands, of pieces of weaponry and armour laid out in geometrical designs. There’s a mirror on the main floor so that you can look at it all at once (google it, there are some pretty impressive pictures of it). I briefly showed Mom the buildings that I have classes in on campus. The afternoon passed quickly, and soon it was time to say good bye. She doesn’t fly back until tomorrow, but her plane leaves early enough in the morning that she’s staying in London this evening. It was great to be able to spend even this little chunk of time with her. Thanks for a great weekend, Mom 🙂

3 thoughts on “A Reunion”

Living in Toronto, but exploring the world View all posts by Heather